If you don't remember your password, you can reset it by entering your email address and clicking the Reset Password button. You will then receive an email that contains a secure link for resetting your password 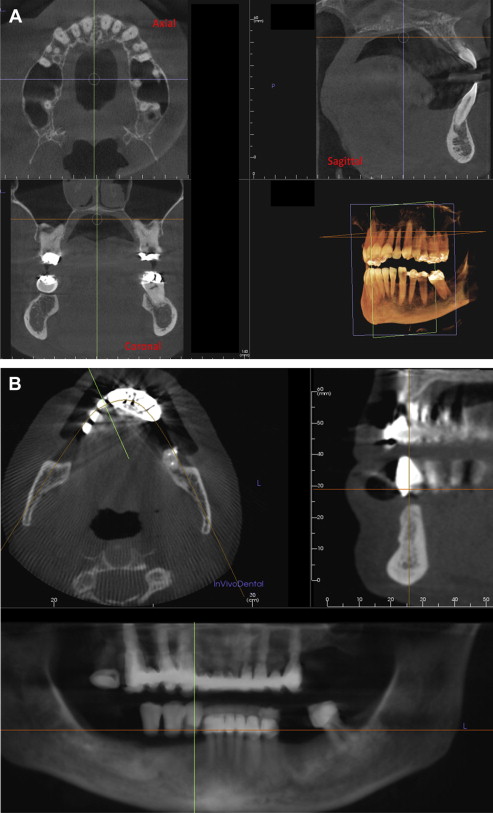 Anatomy of the Maxillofacial Region in the Three Planes of Section

Multiplanar imaging has offered an unparalleled diagnostic approach when dealing with an unknown entity (pathologic or not) that has stood as a diagnostic challenge. This concept is inherent to volumetric type of data (computed tomography [CT], cone beam computed tomography [CBCT], magnetic resonance imaging) and has offered the diagnostician the unique ability to generate images (sections) at different planes (flat or curved). Because a volume of data has been acquired and stored by CBCT, this data can be reformatted or realigned and several different types of images can be synthesized in any way the diagnostician requires,
1
A comparison of maxillofacial CBCT and medical CT.
Atlas Oral Maxillofac Surg Clin North Am. 2012; 20: 1-17
thus eliminating the superimposition of the area or entity under investigation with other neighboring structures and allowing its assessment from all perspectives. With multiplanar imaging, the diagnostician/operator can re-create images in different planes (flat or curved) with very simple functions, increasing the diagnostic efficiency in the hands of the knowledgeable individual in an unparalleled way (Fig. 1).
2
Cone beam tomographic imaging anatomy of the maxillofacial region.
Dent Clin North Am. 2008; 52: 731-752
Undoubtedly, multiplanar imaging, as provided by cone-beam imaging, is a novelty for the dental professional: most dentists and specialists, with only a few exceptions, are not familiar with diagnostic imaging in different planes, although they are keen on interpreting projectional images as those produced by traditional dental imaging modalities (intraoral radiography and panoramic radiography). Sectional images (tomographic images) reveal the spatial relationship of the various known anatomic structures in the maxillofacial region, which was more or less lost in projectional imaging.
In this article the appearance of several anatomic structures of the maxillofacial region as well as the head and neck region in general is reviewed; these structures are analyzed in all 3 basic tomographic planes (axial, coronal, sagittal). Additional reconstructed images may be used to view certain anatomic areas from all aspects. To review the anatomy of the maxillofacial region in a systematic way, the maxillofacial region is divided into smaller areas of interest. Emphasis in this topographic anatomic review is placed on areas that may demonstrate a higher incidence of occult disease. Emphasis is also on structures outside the dentoalveolar region. The anatomy of dental and dentoalveolar structures has been thoroughly reviewed elsewhere.
2
Cone beam tomographic imaging anatomy of the maxillofacial region.
Dent Clin North Am. 2008; 52: 731-752

Midface and skull base